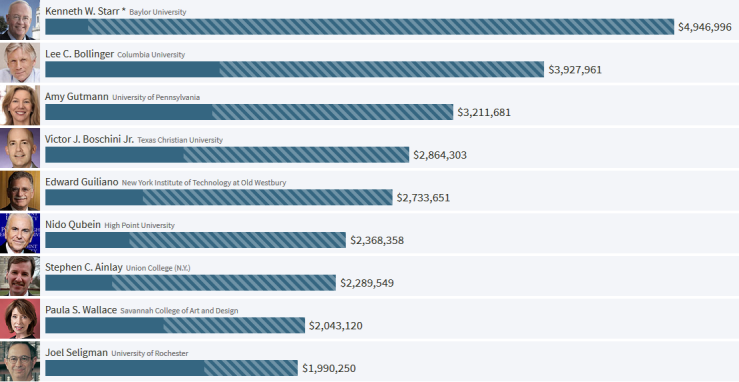 Today the Chronicle of Higher Education released new data on 2016 presidential compensation at nonprofit colleges and universities in the United States.

When Kenneth Starr left Baylor University in disgrace, his golden handshake made him the highest-paid university president of 2016—with total compensation of $4.95 million for the year. (We should all have such a discrediting.)

As Bloomberg points out, however, Starr has plenty of company in the millionaires’ club. The average college president, of the hundreds who are included in the Chronicle data, made $560,000 in total compensation for the year.

In the age of adjuncts, online classes, and lethal levels of student debt, university presidents’ compensation packages are only growing—and rapidly. Together with the toadyism of the many people who defend such avarice in “nonprofit” institutions, it’s one of the most ludicrous and transparently self-serving elements in the general crisis of American higher education.