This week, in a course for new college students, I decided to bring out one of my all-time favorite writing activities. This exercise has proven particularly effective for first-year students, especially if they’re reasonably comfortable writers already. It’s a strangely fun activity designed to teach a critical part of editing: cutting unnecessary words and simplifying complex phrases.

I distributed a worksheet with a single 26-word sentence on it.

This sentence came from a highly regarded historical monograph. It was written by a distinguished historian and released by a major university press. I won’t identify the source here because I have no desire to shame this author in public. As I told my students, it’s a great book. It’s just unnecessarily hard to get through.

I chose the sentence partly because it has some obvious redundant language—unnecessary complexity that many readers can spot quickly when they think about it.

The worksheet I distributed looked sort of like this:

END_OF_DOCUMENT_TOKEN_TO_BE_REPLACED

This weekend, the political scientist Yascha Mounk posed a provocative question on Twitter: “What are the top things universities could do to encourage a culture of free debate and inquiry, not just in the classroom but also in dorms and dining halls?”

(Judging by the context, this question may have been prompted in part by a new “campus expression” report from Heterodox Academy. I discussed the problems with a previous report from the same alarmist study in March 2021.)

Here’s the thing: Because my academic work centers on teaching first-year college students, I ponder issues like this a lot, and I believe Mounk is on the wrong trail.

The thing most people asking this question are actually probing for? It’s not debate. It’s friendship.

Setting aside the intellectual shifts that can happen just because of spending time around new kinds of people, when extracurricular life changes minds, it’s typically because students are forming real friendships, in which important conversations happen organically—not because of a “culture of free debate.”

All those people who wistfully remember (or wish they remember) late nights in each other’s dorm rooms, talking excitedly about the problems of the world? The experience they’re describing is friendship.

When a conversation about something you’re reading or discussing in class spills out into the dining hall, the quad, or the apartment? Why, yes, I do believe you’ve been making friends.

The folks you aren’t afraid of offending when you say something unpopular that needs to be said? They’re either strangers you don’t expect to hang around anyway, acquaintances you’ve already given up on, or, crucially, friends who will trust you enough to listen to what you’re saying.

People who will, in the middle of a busy life, actually sit still while you carefully identify your premises and show why you think they lead to a controversial conclusion? They’re almost certainly people who care about you as a person.

And when you keep having the same argument with the same person over and over, not because you love degrading yourself but because you’re subtly shifting each other’s views over time? “As iron sharpens iron,” you’re honing the mind of your—what’s that word the proverb uses?—oh, that’s right—your friend.

What intellectually curious people really want from college is friendship. The kind that can change the mind as well as heal the spirit.

This same weekend, the culture critic Touré posed another observation on Twitter that I believe is directly related to the fears our intellectuals express about college students: “After 35 it’s easier to get a new spouse than it is to get a new close friend.”

Now, I’m not sure that’s literally true, but the anguish it expresses is recognizable.

And I suspect—though of course, I can’t prove—that when aging college graduates like Yascha Mounk, my fellow geriatric millennial, bemoan the supposed intolerance of today’s young people, it often has a lot to do with how increasingly elusive that kind of friendship seems to us.

Following up the small group activity I described last week (“Reverse-Engineering a Scholarly Article”), I developed a similar classroom exercise this week. The new activity was a “scavenger hunt” designed to help the same students become more comfortable using footnotes.

(I’m asking this class to use footnotes to cite the sources in their final projects, and I was aware that some students had very limited exposure to this form of scholarly architecture.)

I based the activity on Steven Watts’s article “Walt Disney: Art and Politics in the American Century,” which was published in 1995 in the Journal of American History.

This was my way to make sure the activity would involve plenty of interaction.

END_OF_DOCUMENT_TOKEN_TO_BE_REPLACED

A couple of weeks ago, I tried a simple new activity. The students in this course, all first-year undergraduates, are working on original research projects. One student had asked me for practical advice about how to outline their history paper—an essay that will be longer than anything they’ve ever written before. I came up with this activity for a subsequent class meeting. As I expected, the activity took an entire 75-minute period.

First, I located a scholarly article that seemed appropriate in various ways. I was looking for something with a reasonably accessible subject matter and writing style, clear organization, and some identifiable relevance to our course. I also wanted the article to be of moderate length: not overwhelmingly long, but not too short, either.

I settled on Shannen Dee Williams’s “Forgotten Habits, Lost Vocations,” an important article published in 2016 in the Journal of African American History. Among its many other virtues, this text would be relevant to our university’s ongoing mission-and-heritage-month celebration. (This college isn’t affiliated with the IHM sisters, who are the focus of Williams’s article, but it is affiliated with a different Catholic teaching order.) I was also pretty sure some of my students would find it very interesting on its own terms. And it would let me talk a little about how scholarship develops over time; Williams has a book coming out soon, and that book will incorporate material from this article into a larger story and argument.

I printed and stapled a copy of this article (double-sided, two pages per side) for each student. Then I prepared a set of directions.

END_OF_DOCUMENT_TOKEN_TO_BE_REPLACED

In 2016, American undergraduates who had started college in the fall of 2015 (more than 7,000 of them at 122 institutions) said that their opinions of both conservatives and liberals had dramatically improved during their first year of college. Half of all students had already become more appreciative of conservatives; nearly half had become more appreciative of liberals.

But when surveyed again in their final year of college, those same students had changed their minds. Across almost all religious groups, the appreciation that these undergraduates had gained for conservatives had been “nearly or totally erased” since early 2016. In fact, by the time the class of 2019 graduated, its students from every major religious group—including Mormons and evangelicals!—were more likely to report a high opinion of liberals than of conservatives.

These are the (not yet published) findings of researchers running a project called IDEALS (the Interfaith Diversity Experiences and Attitudes Longitudinal Survey), who discuss their work today in an essay at Religion & Politics.

Matthew Mayhew, Kevin Singer, Alyssa Rockenbach, and Laura Dahl write that “students of all faiths in the class of 2019 were warming up to political conservatives at the end of their first year in college, which was during the final year of Obama’s presidency. Now, three years into Trump’s presidency, conservatives can only wonder what could have been.”

The researchers blame students’ plummeting approval for conservatives on “the Trump effect.” 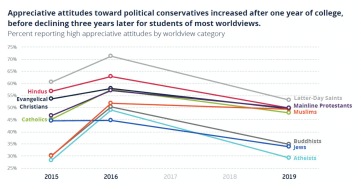 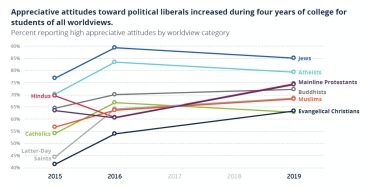 Allow me to make some observations of my own.

I do think the “Trump effect” explanation for these findings is basically plausible. It is also consistent with my experiences working in higher education.

There has been a dramatic shift in student political temperament since early 2016 on the campuses where I have worked, and it does seem to be connected (in various ways) with the Trump phenomenon. Undergraduates in 2020 tend to identify conservatism with Donald Trump, in my experience, and they tend to hold conservatism in much lower regard than the undergraduates I taught a decade ago. But for the purpose of evaluating the IDEALS study as a piece of research, I do approach the idea with some caution.