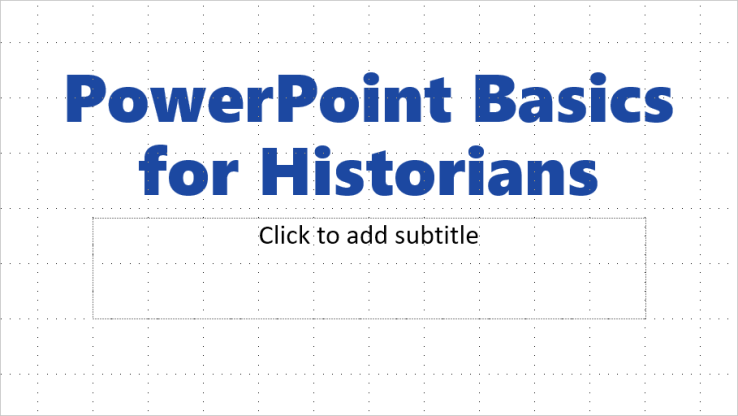 This is the first installment of a series designed to help historians use Microsoft PowerPoint effectively in the classroom. (You may want to read the series introduction first.)

Today, I’m writing about the big picture of PowerPoint design. This post is about how to set up a slideshow to communicate in the classroom (or conference hall) clearly and effectively. It’s not really about the technology, per se—at this stage, we’re just talking about how to build a visual communication element into a history talk.

As you design your presentation, you should keep three core principles in mind:

When I was in college, you sometimes knew when an enthusiastic professor had just switched from overhead projector transparencies to PowerPoint. His or her slides would be full of clip art, bouncing and flying effects, elaborate transition animations, and garish colors. It was endearing—the first time. But that was another technological age. To impress the jaded young snapchatters in your classroom today, you need a different approach. You need to begin with restraint.

The single most effective thing you can do to make your slides better? Delete things.

Every time I teach a lesson with previously used PowerPoint slides, I cut things. Topics I’m now confident I will remember to discuss. Excess words. Complete sentences that can be single words or short phrases. Supporting points I can extract and place on their own slides. Ideas that could be better expressed through a quick class discussion.

The most common complaint about professors who use PowerPoint is that we just stand in class and read our slides aloud. The easiest solution to this problem is astonishingly effective: Leave things out. You want to leave things unsaid on your slides so that you can say them in person. Don’t make slides that could replace you.

A few colors go a long way. Typically, excluding images, I think you need only about four colors or shades in your presentation: a very light color (or white), a fairly dark color (or black), something in between (to be used less often), and maybe a special highlight color (to be used sparingly).

When choosing these colors, keep a few things in mind. First, they will show up differently on different screens, especially when you move the presentation from your computer monitor to a projector screen. Very subtle differences of hue or shade will be lost in the typical classroom.

Your beautiful forest green may just look black. Your warm sky blue may look purplish. Your cheerful orange may disappear completely into the white background behind it, leaving audience members squinting like spotters trying to find airplanes in a summer sky. For the sake of people in the back row, be a little unsubtle with your colors.

Another reason for this: You want to choose colors that will provide crisp contrast—especially if your presentation involves much text.

The cruelest thing I ever did with PowerPoint was a presentation I delivered in an early-morning economics class. I placed all my text—walls and mountains of it, since I lacked confidence—in dark green on a dusty green background. I suppose I was going for a currency theme (my topic was the collapse of the Thai baht in 1997), but maybe I was just feeling vindictive. The green fog on all my slides put everyone but the professor to sleep—including me.

It was a really good talk otherwise.

“Cleanness” in visual design is about the empty space. A clean house has empty counters, floors swept free of debris, furniture you can sit on. It’s a space where whatever thing is in front of you has your full attention. A clean PowerPoint slide has plenty of empty space around the words—or if it displays an image, it isn’t cluttered unnecessarily with other images or words.

Why does this matter to the teacher? It matters because attention is always about empty (or “negative”) space. You don’t want your audience’s gaze roaming randomly all over the slide; you want it focused on exactly what your students need to see at a given time.

In practice, this means you should avoid using most pre-made PowerPoint templates or backgrounds, which fill the screen with unnecessary decorative elements. You should also maintain healthy margins around any text you use. And don’t put too much of anything on one slide.

Consistency matters because inconsistencies are distracting. The mind treats new patterns as puzzles to solve instead of paying attention to what you want it to see. A slide presentation full of randomly different typefaces, sizes, and colors sends the audience’s attention in all different directions trying to figure out the patterns.

Of course, some variety is good—even necessary to keep the audience awake. But consistency doesn’t mean sameness. You want variations on a clear theme.

When the size or style of your text changes suddenly, it should mean your text is up to something unusual. When you insert a picture where normally there isn’t one, it should mean the picture is significant. Conversely, when things look similar in different places in your slideshow, they should probably be doing similar things: the same typeface, for example, might always be used to set aside a keyword your students will need to define later.

The audience unconsciously uses your design choices to save time when deciphering what you mean. Inconsistency wastes time and thus makes comprehension harder.

There’s another reason some teachers can’t resist the temptation to read their slides verbatim. They think the main purpose of PowerPoint is to make information easier to memorize. That notion is deadly to the history teacher.

Maybe you don’t need the reminder. But either way, how can you use PowerPoint in a rhetorically effective way? How can PowerPoint make the argument of a lecture stronger? Here are a few ways.

The most obvious (and sophisticated) rhetorical advantage of PowerPoint is that it can display actual pieces of historical evidence while you talk.

Sometimes you can do this with images—either as illustrations of points you’re making yourself, or as primary sources to pause over with your students, breaking up your lecture with discussion. Either approach can have a powerful effect on your audience.

You can also do this with quotations and citations. In effect, PowerPoint slides can serve as “footnotes” to your lecture. You don’t need to read aloud what such slides say, at least not in full; it’s usually enough to make them visible. By displaying them, you are proving to your students that a snippet quotation has a fuller context, or that you know where your information is coming from, while providing the option of exploring the source in greater depth if students have questions or concerns.

Another key advantage of PowerPoint: It can help students imagine things they haven’t seen before.

Remember, as a trained historian who was probably interested in history from a young age, you have a vast bank of mental images that your students don’t have yet. A lot of lecturers take these images for granted when they speak—assuming that students will somehow magically know what a ziggurat is, or what a Mary Wollstonecraft might be, or what a struggle session was like during the Cultural Revolution.

For your students, these mental images are not mere decoration for historical facts. They are crucial for understanding what the heck you’re talking about.

However imperfectly, students have to be able to imagine the scenes you’re implicitly describing. Their ability to do this is critical to the success of your argument. Unless students can visualize a scene (whatever that means for them), they have no way to assess the mechanics or the power relationships or, ultimately, the plausibility of what you’re claiming.

So when you build a PowerPoint presentation, you want to fill it with materials that students can use to help visualize what you’re talking about.

A third way PowerPoint can strengthen your argument is by showing its structure, and especially by highlighting important points. Presenters and students alike can easily get lost in the branching trails and undergrowth of a lecture. PowerPoint can provide breadcrumbs back to the main trail or identify landmarks by which to orient yourself. This is not only a matter of organizing the lecture for narrative purposes; it also makes your central claims and use of evidence more comprehensible.

This brings me to a final fundamental principle of PowerPoint design.

As an impression, each frame in your storyboard sequence should connect to the next one according to the logic of drama—the way one scene gives way to another in a film.

Some of what I’m tempted to say about that is too complicated for this post. It touches on the design of the lecture itself. But let me put it this way.

If you treated each PowerPoint slide as a paragraph, you’d be constructing the argument of your lecture in a way that would feel fundamentally unnatural and stilted in the classroom. A lecture—even if you transcribe it word for word—shouldn’t flow like a written essay. (Not an academic essay, anyway.) Neither should the PowerPoint slides playing behind it.

The connections among slides that flow this way aren’t always obvious. So to make sure the lecture flows well in practice, I write brief notes for myself—not visible to the audience—explaining what the transition should be like after each slide. If I’ve been talking about a social problem and then want to introduce a character on the next slide, for example, I write myself a note, usually something like TRANS.: We can see the problem clearly in the life of …

This way, the flow of my storyboard becomes the visual backbone of a compelling oral story.

My next post in this series will be shorter and more concrete: In a few days, I plan to examine some simple ways to ensure a smooth experience when you’re actually showing PowerPoint slides to an audience.